Azure Virtual Machines, have always had a local non-persistent disk attached to them, with the size of this disk varies with the size of the VM. In the lead up to the release of the D-Series VMs, the performance of the local disk on the original A-Series has been, in my opinion throttled in order for the D-Series to be marketed more effectively. In the graph below, you can see my personal IOPs benchmarks for the Azure local disk. Performance steadily increased, before dropping off sharply this fall with the D-Series showing the same performance which was once available on the A-Series. 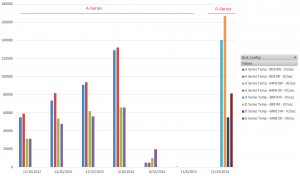 It’s unfortunate that the A-Series had to suffer this drop in performance, but it’s not too bad when you look at the pricing.

In addition to the SSD on the D-Series, you also get 60% faster CPU over the A-Series.